By the time the JANAKI brand name was established in every nook and corner of the state and even in neighboring states whereever poultry farming existed, the poultry feed has taken a major share of the group’s business and the introduction of new technologies in feed manufacturing like pellet and crumble feeds gaining popularity by virtue of their contribution for better growth, FCR, and better livability in broiler birds and better egg production, persistency and better livability in layer birds. The group knowing the importance of pellet and crumble feeds to exploit the full genetic potential of exotic breeds of broiler and layer birds started a new feed plant on the name of M/s. VIMALA FEED PVT LTD in LALGADI MALAKPET village of RANGA REDDY DISTRICT OF ANDHRA PRADESH. Mr. C.Madhusudana Rao, the youngest son of Sri.C.Ananda Rao, looks after all the operations of the company as Managing director.
First time in INDIA the VIMALA FEEDS PVT.LTD was equipped with highly advanced machinery like AUTO BATCHING system where automatic weighing and mixing of raw materials including the micro ingredients takes place. The BOA COMPACTOR installed helps in better digestibility and optimum utilization of nutrients in the feed leading to uniform performance in the birds. Along with the BOA compactor, the pellet and crumble equipment installed were imported from PTN-HOLAND and introduced BULK LOADING SYSTEM first time in INDIA where the finished products are transported by bulk tankers directly to the farms thus avoiding the bagging of finished feed as well as reducing the feed costs.Having highest production capacity of 480 metric tons of pellet/crumble feeds and 960 metric tons of mash feeds per day the VIMALA FEEDS became the flagship company of the group. Today the VIMALA brand of feed is very much competing with all international brands produced in INDIA and is enjoying the leading market share in ANDHRA PRADESH and TELANGANA STATE. 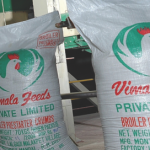